Play can be serious business. Playing is certainly the main way that very young children learn, until they go to school.

What if they don't go to school? What if the ages of five and six don't mark a life change, and the playing progresses along naturally?

Many people would have no idea how to answer that question. The idea that toddlers' play would naturally progress to other levels without interruption, without separation from families, and without professionals telling children when, where and how to play is foreign to most in our culture.

In one small corner, though, it's common knowledge. There are unschoolers whose children have not been to school and who have continued to play.

Recently on a discussion list someone said sure, she understood how young children learn through play, but what about when they got older and stopped playing?

I have known people who stopped playing, but I was never one of them. In my last year of high school, my boyfriend who had already graduated built a kind of playhouse in the woods to be "our house." It was a hole under the roots of a cottonwood, dug out a little better, covered with branches and sticks found by the side of the Rio Grande behind the high school. I ditched school there a couple of times and met him. Was it dignified? No, it was like Neverland! In college I had another boyfriend and we had a running fantasy "plan" to live in the 1600s in England and run a really sweet, peaceful orphanage, filled with music. It wasn't long before I was involved in medieval doings with the Society for Creative Anachronism, which is an international medieval-themed life-size game.

As with all games, and all playing, there was reality too. We really made things and learned music and researched and made clothing and armor. We cooked real food. Then we put on our new clothes and our new names and played elaborate games.

My three children grew up around adults who played, not just putting on feasts and tournaments and building medieval-looking camps, but also playing strategy board games and mystery games, having costume parties when it wasn't even Halloween, and making up goofy song parodies on long car rides.

Maybe because I kept playing I had an advantage, but I don't think it is beyond more serious adults to regain their playfulness.

But (some might be thinking), if you just play all the time, how will you know the kids are learning? I knew my boys had learned all the swimming safety rules when they rhythmically took turns reciting them exactly wrong: Never swim with a buddy, always swim alone; Always swim in a storm; Always run by the pool...

There was no reason for me to say, "That's wrong." I would have spoiled their fun if I had. I didn't say a word. I knew enough already, because I had this information:

1) they knew all the rules
2) they understood the concept of opposites
3) they had a sense of humor and weren't afraid to use it. 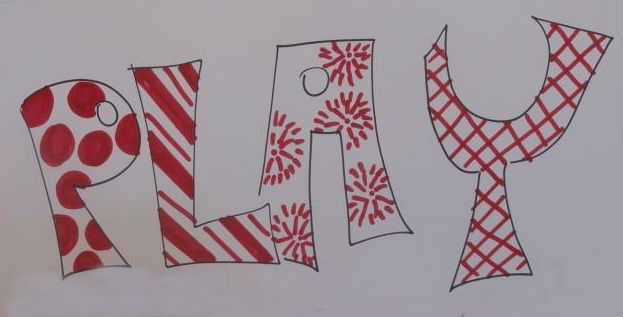 "How do you know they're learning?" The people who ask that question are looking at the world through school-colored glasses. Those same parents knew when their children could use a spoon. They knew when the child could drink out of a cup. They knew when walking and talking and bike riding had been learned.

Here's how I learned that Kirby knew about the Huns: He was waiting for me to give him a ride, while I was talking on the phone to a local mom who was considering homeschooling. We were discussing unit studies, and I said they weren't necessary, that people just keep learning their whole lives. "You can't finish China," I said, and Kirby commented dryly, "The Huns tried that."

So, on my mental checklist, I note Kirby identifying the Huns, using the word in a sentence, knowing a dab about Chinese history. But was I testing? Was he reporting? Neither. He was just making a joke. And it was sufficient for me to discover what he knew.

All my life I was given advice like this:

Be serious Act your age
Don't take this lightly.

Now, though, that I'm involved with unschooling I say to adults and to children alike, take this lightly. Play around.

But play safely. Play is only play when no one involved is objecting. It's only playing if everyone is playing.

The gentlest games can be dangerous. Tennis is a non-contact sport, but you could kill someone with a tennis racket. Chess is pretty passive, but humiliation can hurt permanently. Some adults I know (and, sadly, some children) avoid humor and avoid playing because they have been wounded by the alleged "just playing" of others.

The connection between humor and learning is well known. Unexpected juxtaposition is the basis of a lot of humor, and even more learning. It can be physical, musical, verbal, mathematical, but basically what it means is that unexpected combinations or outcomes can be funny. There are funny chemistry experiments, plays on words, math tricks, embarrassingly amusing stories from history, and there are parodies of famous pieces or styles of art and music.

Here are some recently-touched sources from our house:

From these and other books, videos, and sound tapes that are intended to induce hilarity, my kids (and my husband and I too) have learned about history, geography, grammar, literature, music, mythology and religion. There doesn't need to be any separation of learning and laughter.

While I was working on this article, I stopped to make waffles. An egg was cracked a bit in the carton and had dried back up over the hole. I could've put it quietly in the trash, but I took it to Holly and said dramatically, "This egg must be destroyed." She jumped right up to get it, and I told her I didn't know how long it had been broken, and she could throw it if she wanted to. She started out and I asked where she was going to do it. I could've made suggestions, but she had decided: "Off the deck!" That deck is a long way up there. Good choice.

She has broken eggs before. It wasn't new, but it's still fun. When she got back into the kitchen, she was excited to have missed her target. "I aimed for the dirt but I hit the beam (a railroad tie on the ground) and it broke and splattered."

If there are those among the readership who would prefer scholarly justification for living more creatively and lightly, you might read Conceptual Blockbusting by James Adams or Free Play by Stephen Nachmanovitch. Or you could skip the research, your children could be your teachers, and you might simply resolve to play more for their sake. The benefit to you will be a bonus.


"Playing" appeared in the July/August 2004 issue of Home Education Magazine and appears in the book Moving a Puddle.

BIO at the time:

Sandra Dodd has a husband who's an engineer, an oldest who works at a gaming shop, a middlest who surprises people, and a youngest who charms them. (Photos of the Dodd kids here.)


"People who go to school are more able to take orders and be tougher. Homeschoolers are like masters, sculpters of what's around them."

Photo by Phoebe Wyllyamz, Ithaca NY, 2014 (quote by the middle child in the image)

Other articles on living lightly with children:

Leaning on a Truck

Children's games, rhymes and songs (in the history section)

Roya Sorooshian did the "Play" art quickly for the door of a room at a conference.